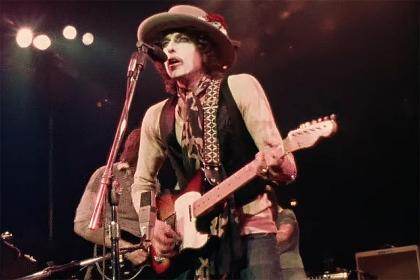 June 25, 2019
Oddball Films is celebrating 25 years of iconic, eye-popping images! THE HISTORIC BALBOA THEATRE * 3630 BALBOA STREET * SAN FRANCISCO * JULY 11TH * THURSDAY EVE * 8PM Joshua Moore's Emmy award-winning film "Oddball" will be screened. "Oddball" features a beautiful portrait of Oddball Films and its founder Stephen Parr. Come witness a unique and magical vision of the lifework of a remarkable visionary artist, and all the unusual, mystical, and spellbinding images of an iconic San Francisco landmark."So Wrong They're Right” by director Russ Forster -in attendance!- tells the story of a 10,000... Read more

Rattlesnakes, Cameras, Pistols and Lilies: Come see a unique exhibition of photographs and paintings of a desert journey. 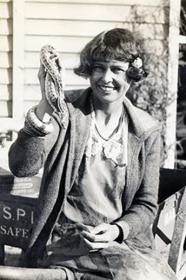 Oddball Films is excited to recommend this one-of-a-kind exhibition spearheaded by our friend, the multi-talented artist Warner Graves. Warner has co-edited, along with Ann Japenga, a book of photographs chronicling the story of his grandmother Lula Mae Graves and her cousin, Susie Keef Smith as they travelled through the southwest in the 1920s armed with a pistol, a camera, and an eye for the desert’s beauty. Recently Warner took the time to travel through many of the spots that his grandmother Lula Mae and her friend Susie visited and painted the landscapes he saw there. Lula Mae and Susie’s photographs and Warner’s paintings are being shown together until May 15th at La Quinta Museum, just southeast of Palm Springs, California. 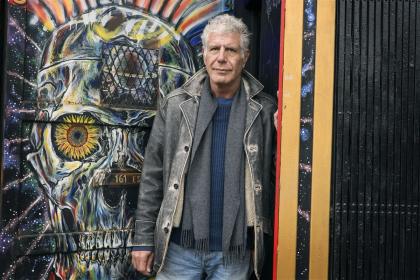 The Other Story of O: Oddball Version

In our story of O, a vintage neon letter O was found by Stephen Parr and Tara Lee Ford and deemed worthy of showcasing on our Oddball wall. It was recently installed by dear friend of Stephen's, Robert Burg, Lead Scenic Artist for San Francisco Ballet. Here are Tara and Robert doing the honors.

November 21, 2018
Happy Thanksgiving from all of us at Oddball Films! We're all grateful that we have the opportunity to work amidst thousands and thousands of oddball images like those in this 1946 Macy's Thanksgiving Day Parade. Thanks to our founder Stephen Parr who rescued films that were tossed aside, unwanted or otherwise abandoned. He remains our hero for making sure all of these cinematic treasures are still with us and being projected out into the world for everyone to see. 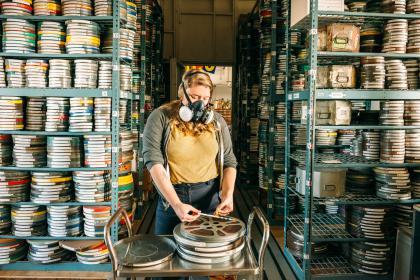 Oddball Films and SMFA are initiating a film preservation project. Our first focus is on detecting and measuring the severity of acetate deterioration ("vinegar syndrome") in our film collections. Shown here is lead archivist Megan Needels using A-D strips to measure these levels on this 16mm film print.

October 10, 2018
ATA will be projecting 8mm, Super-8mm, 9.5mm, and 16mm films. If you would like to see your film up on the ATA screen, bring it early, during the inspection period from 1:00pm to 2:00pm. Screenings will begin at 1:30pm and will be followed by a special tribute to long-time Home Movie Day host Stephen Parr of Oddball Films and the San Francisco Media Archive.Visit ... Read more

Our archivists here at Oddball Films are always active in the film community. So in addition to looking for us in the credits, also keep an eye out for the Oddball Films team at film events all around the country. If you attend the Telluride outdoor screenings, peek in the booth after the show and say hello to our staff member, Layton Hebert! 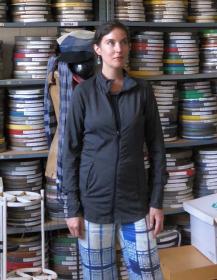 Artist Elizabeth Briel visited Oddball Films last Monday to document the infamous 17 Reasons sign for an upcoming project. Learn more about the history of the 17 Reasons sign here. Our beloved founder, Stephen Parr, went through great lengths to salvage the sign when he saw it was being torn down from the roof of the old Thift Town building (since displaced after losing their lease) back in 2002.Elizabeth's "Untitled Project" is a series of paintings-in-progress that display an imagined life lived here in the Bay Area... Read more

July 7, 2018
On Friday, July 13th, at 8:00pm, the short film ODDBALL, made by Joshua Moore, will be featured on KQED TV as part of their Truly CA: Our State, Our Stories program.ODDBALL is a stunning profile of Stephen Parr, the man behind what is likely the world's most remarkably eccentric archive film collection, Oddball Films. The film has screened nationally at Mill Valley Film Festival, Dallas Video Fest, SF IndieFest, Florida Film Festival, Taos Shortz, Disposable Film Festival, and Marfa Film Festival. Don't miss this one-of-a-kind feature about a one-of-a-kind artist, archivist, and peerless... Read more 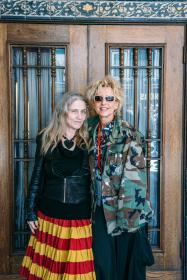 Presenting Getting Lucky at SF DocFest 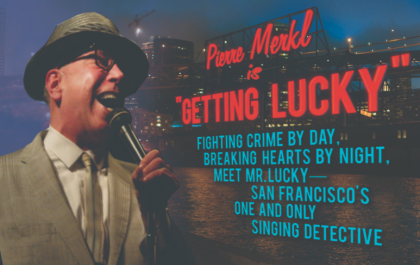 DocFest starts this weekend and Oddball Films is co-presenting several shows. On Sunday June 3rd, Oddball Films is proud to present, Getting Lucky, a profile on local eccentric troubadour Mr. Lucky. Mr. Lucky is a private investigator, a musician, and an invoker of ages past. He was a close friend and supporter of Oddball Films founder Stephen Parr. Additionally,... Read more

April 5, 2018
Oddball Films invites you to the historic Castro Theater on Monday, April 9th, at 8pm for a special 16mm screening and live music event: A Celebration of Oddball Films with Marc Capelle’s Red Room Orchestra. This show, part of the 2018 San Francisco International Film Festival, was culled from the greatest hits and favorites of Stephen Parr, our beloved founder, who passed away in October. Featuring zany industrials, sublime art films, goofy animation, local news outtakes, and much more, all drawn from Oddball’s vast archive. Deftly remixed, reworked, and retracked by Marc Capelle and his Red... Read more 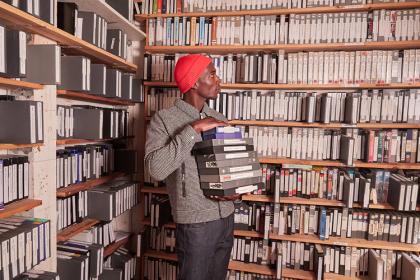 Learn about the history of Oddball Films and its future in a new interview profile (and fashion shoot!) in Bob Cut Magazine.

Video of the Memorial for Stephen Parr

Sadly, founder and Director of Oddball Films and the San Francisco Media Archive, Stephen Parr, passed away suddenly on October 24, 2017 after a struggle with declining health. His family and Oddball staff have come together and are carefully working on ensuring a productive future for both entities while preserving the proud tradition of providing the most eclectic footage to our customers. Oddball continues to fill... Read more

Cinema Soiree - The Making of Maupin: Tales of the Archive, 10/26 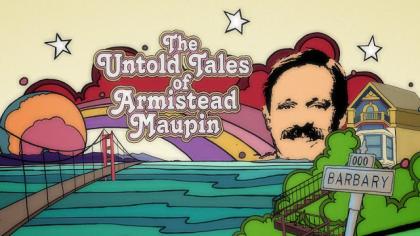 The Oddball Cinema Soiree with Jennifer Kroot scheduled for October 26th is being postponed. The new date of the event has yet to be confirmed. Thank you for your interest, and stay tuned for updates.  We are are pleased to announce that local documentarian and director of The Untold Tales of Armistead Maupin Jennifer Kroot and her co-director/editor Bill Weber will be joining us at the archive for the next iteration of our Cinema Soiree series, and are thrilled to have... Read more 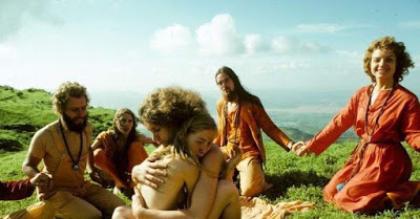 Due to popular demand, Oddball Films is teaming up with author and historian Erik Davis to present a second screening of The Holy Haight: How the 60s Counterculture Changed American Religion Forever at the Roxie Theater on July 26th at 7:00 PM. If you missed it at Oddball in May, come out for a second chance to celebrate the 50th anniversary of the Summer of Love with us!Davis will draw on a kaleidoscopic array of... Read more 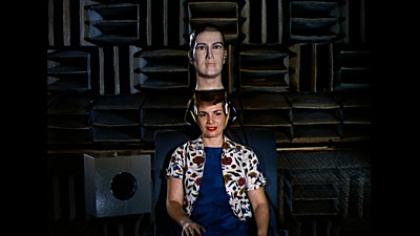 SF Doc Fest is fully underway, and Oddball Films is making its mark! We provided footage to two opening night films, Turn It Around: The Story of East Bay Punk and Take Every Wave: The Life of Laird Hamilton, and our director Stephen Parr heads to the Roxie Theater next Wednesday, June 13th at 7:15 PM for another iteration of Sonic Oddities, a live cinema-sound collaboration featuring local musician... Read more